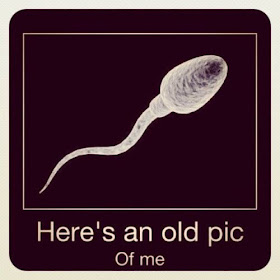 At the birthday party of a ten year old girl, a group of mothers looked on anxiously while talking about their children. While the little girls danced to Taylor Swift and compared their collection of silly bands, the mothers were deep in discussion.

"How long did you breastfeed for? Was it exclusive or did you supplement with a bottle?" asked one mother.

"Was she dry at night by two, or just dry during the day? We moved to pull-ups by eighteen months" said another.

"Did she have a sippy cup or did she go straight from breast to a cup?"

It sounds unbelievable doesn't it?

That's because it is.

By the time your child is ten, your nipples will be safely tucked away inside your bra. If you were to pull them out at the local coffee shop it's possible you may be arrested. There will have been 964 new experts in children's sleeping patterns, and you will groan and change the channel each time they pop up on the telly to promote their new book. The aisle in the supermarket with the wet wipes and the boxes of Huggies will be a complete mystery to you.

Children will win awards at school and no-one will say "I hear she was the first in her baby group to use a straw". No-one looks at a child and says "I really like the way they walk, I bet they walked by ten months, they look like they've been doing it longer than everyone else."

The game of my child is going to turn out better than your child has ended, because everyone has realized it's irrelevant. The baby that could point to the blue blocks and stack the hoops faster than anyone else is now failing Language Arts but blitzing in Geometry. Parents have learnt that each week there will be another hurdle, maybe it will be social, perhaps it will be scholastic, we all pray it wont be medical.

Your challenges this week may involve not making the basketball squad or falling out with a best friend. You will try and stay calm while you work on fractions, listen intently to the project on sharks, and be genuinely interested while you are given the task of quizzing the religious definitions of certain aspects of Judaism.  You may find yourself wiping away the tears at the orthodontist (both yours and hers), and then bursting with pride over the courage displayed while being vaccinated, again, both yours and hers.

First words, first teeth, weening and first steps are all captured in photos and video clips, their dates are immaterial.

Having four children in four different countries has meant that I have received four very different approaches when it came to parenting advice. To wrap or unwrap, to control cry or to attach, to breast-feed for at least 4, 6, 12 months or more. To circumcise, to what in the hell would you do that for? You can have one drink. You can have no drinks.

My four children, unsurprisingly, have different levels of intelligence and physical abilities depending on what it is that they are doing at the time. I would hazard a guess that none of it is related to whether they sat in a stroller or spent more time in a baby sling. The one pregnancy that I technically got everything right for, has not resulted in a child any more brilliant than another. The unplanned pregnancy, the one that didn't receive the vitamins and the forethought, is interestingly the child who is supposedly quite gifted. This could be luck, this could be life.

When I look back at everything I was told and every book that I read, one piece of advice stands clear of everything else. It came from my obstetrician in Malta. A brilliant man with the kindest heart. A man with six children of his own.

As I was packing my bag ready to leave the hospital with a brand new third little traveler, Dr Muscat walked in to my room to check on how I was and joked about how the easy bit was over. I was now heading home to three children under four. He stood over the third little traveler and looked down at him with a very sincere smile and said "you are very lucky" and then he looked in my direction. "Both of you - you are very lucky".

"Take him home and cherish him. Remember to take a moment to really look at him and love him. It is the very best thing you can do for him".

It's simple but it's true. Don't get caught in the hype, don't beat yourself up, don't over think it.